The Australian Government has committed $225m to provide 10 cm (or better) accurate positioning to anyone, anytime, anywhere in Australia in the near future. This is a significant improvement from the 5-10 m accuracy you can currently achieve using GPS enabled devices.

In anticipation for the growing use and reliance on positioning technology, the Geodesy Working Group is leading the upgrade of a number of elements of Australia’s Geospatial Reference System including the static datum, the introduction of a time dependent reference frame, improved geodetic infrastructure and standards development to improve access and efficiency of geodetic data.

Upgrade 1: Upgrading the static datum from GDA94 to GDA2020

In anticipation for the growing use and reliance on positioning technology, the Permanent Committee on Geodesy led the development of the upgrade of Australia’s ‘static / plate fixed’ datum from the Geocentric Datum of Australia 1994 (GDA94) to GDA2020 which was released in 2017. A ‘static’ datum means that the positions of features (e.g. roads, buildings and property boundaries), do not change over time despite the ongoing changes in the Earth’s surface (e.g. plate tectonic motion). This is beneficial for many applications where it is easier if the coordinates of features do not change (e.g. a major road development project).

In contrast, Global Navigation Satellite Systems (GNSS) base their coordinates on a framework that is fixed to the centre of the Earth around which satellites are orbiting. These frameworks are called ‘time-dependent reference frames / earth fixed’ in which the positions of features change with time due to plate tectonic motion.

Historically, location differences of a metre or so have not been an issue, because GNSS has traditionally only provided accuracy of 5-10 m. In fact, when GDA94 was adopted in 2000, GPS positions were ‘accurate’ to 100 metres. Since then, however, two important things have happened: 1) Australia’s tectonic plate – the Earth’s fastest moving continental plate – has moved about 1.5 metres northeast (approximately 7 cm / yr), and 2) positioning technology has evolved considerably. By 2020, Australia will have moved 1.8 metres northeast of where it was in 1994, and many of us will own devices that pinpoint places as small as, well, a smartphone. With real-time access to precise satellite positioning at our fingertips, we’ll notice discrepancies with GDA94-mapped features. The upshot is that Australia’s datum needs updating so we can reap the benefits of 21st Century positioning technology.

Australian and International research shows, that there is a rapidly growing user community including Location Based Services (LBS) and Intelligent Transport Services (ITS) that need real-time, high-precision positioning solutions aligned to a global, time-dependent reference frame, such as the frames in which GNSS operate.

In recognition of emerging user needs for static and time-dependent reference frames, the Intergovernmental Committee on Surveying and Mapping (ICSM) and the Spatial Information Council (ANZLIC) have endorsed a 'two-frame' approach to support users who prefer to use a static datum, while also meeting the needs of those who require a reference frame that accommodates ongoing changes in the Earth.

In 2020, Australia will adopt the two-frame approach, enabling users to work with a static datum, GDA2020, or with a time-dependent reference frame known as the Australian Terrestrial Reference Frame (ATRF2014). Given the diverse range of user requirements in Australia, the choice of which reference frame to use (GDA2020 or ATRF2014) will remain with the user for the foreseeable future.

For all the benefits of GDA2020 and ATRF2014, these upgrades only provide GNSS users with the ability to compute their position and align spatial data accurately with respect to the ellipsoid – a simplified mathematical representation of the Earth’s surface. However, many height applications require ‘physical heights’, that is, height referenced to a surface of ‘equal gravity potential’ (i.e. the geoid) where water will flow from higher heights to lower heights. This is not always the case with ellipsoidal heights. The difference between the ellipsoid and geoid is between -30 and +80 m across Australia.

For this reason we have a physical datum, known as the Australian Height Datum (AHD) which is closely aligned to the geoid and a model to convert ellipsoidal heights to AHD heights known as AUSGeoid. 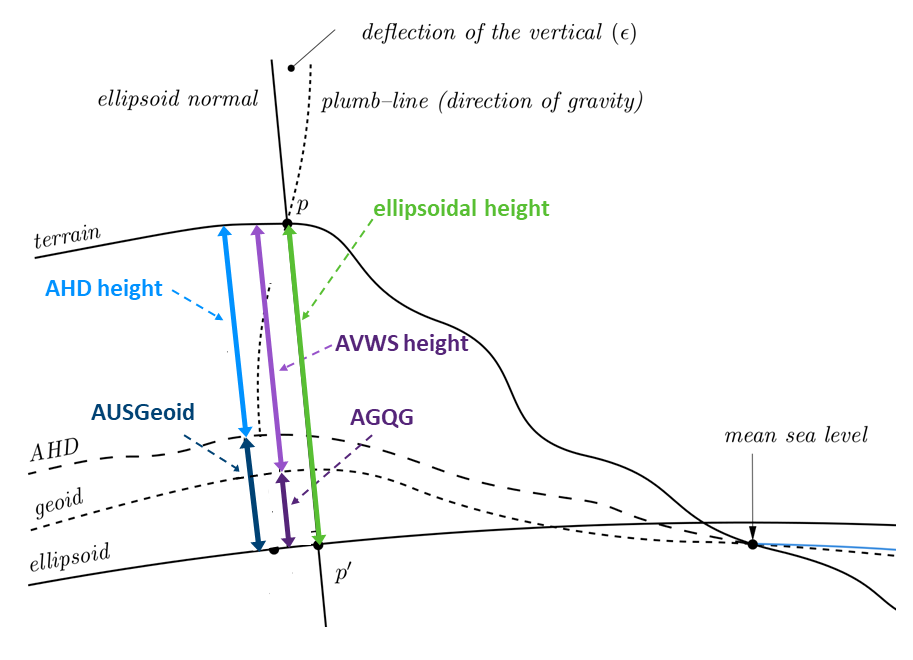 Nonetheless, AHD is known to have a number of biases and distortions which mean GNSS users are only capable of deriving AHD heights with accuracy of 6-13 cm across Australia. Uncertainty in the national height datum of this magnitude makes AHD inappropriate for some applications that require a more accurate reference surface. In response to this Geoscience Australia led a user requirements study with FrontierSI to investigate current and future requirements for physical heighting in Australia.

The results of the study indicated that AHD is still fit for purpose for tasks over short distances (less than about 10 km) for projects such as cadastral, civil engineering, construction and mining while users are less satisfied when working over larger areas (greater than about 10 km) for environmental studies (e.g. flood, storm modelling), LiDAR surveys, geodesy, hydrography.

A recommendation of the study was to therefore adopt a “two-frame” approach similar to that done with GDA2020 and ATRF2014. AHD will remain as the national height datum and the Australian Vertical Working Surface (AVWS) will be made publicly available on 1 January 2020 for those who need it.

The Australian Gravimetric Quasigeoid (AGQG) model is a model of the Australian gravity field and meets the key criteria identified in the user requirements study:

Importantly, the accuracy of AGQG is between 4-8 cm across Australia. This addresses one of the biggest concerns from the user requirements study who have noticed the quality of their data (e.g. LiDAR) was starting to become more accurate than the datum (AHD). Geoscience Australia will be working with all the states and territories to continuously improve AGQG as new gravity data is included and modelling techniques are refined.

Who is leading the Upgrade of the Australian Geospatial Reference System?

The Intergovernmental Committee on Surveying and Mapping, the Permanent Committee on Geodesy and the GDA Modernisation Implementation Working Group are helping users and government agencies to build transitional tools and technical resources, and providing information for software developers, equipment providers and users of spatial information. For more information or assistance please Connect with Us.