The first step in converting the information contained in the real–world onto a ‘piece of paper’ was to devise a system where everything could be uniquely located in the world.

Very early maps (which usually showed small local or regional areas) used a grid technique which relied on simply measuring the distance and direction between points of interest and then plotting these onto the ‘piece of paper’. This method assumed that the Earth was flat.

With the general agreement that the Earth was, in fact, round, a different methodology needed to be developed. The system that has been developed over many centuries is called latitude and longitude.

The location and measurement of latitude and longitude essentially involves complex mathematics (especially geometry) and a series of international agreements ⁄ conventions for recording locations on the surface of the Earth.

The first convention to be developed was latitude. This is based on long term astronomical observations about how the sun is perceived to move across the surface of the Earth.

These observations also developed the conventions that the sun: 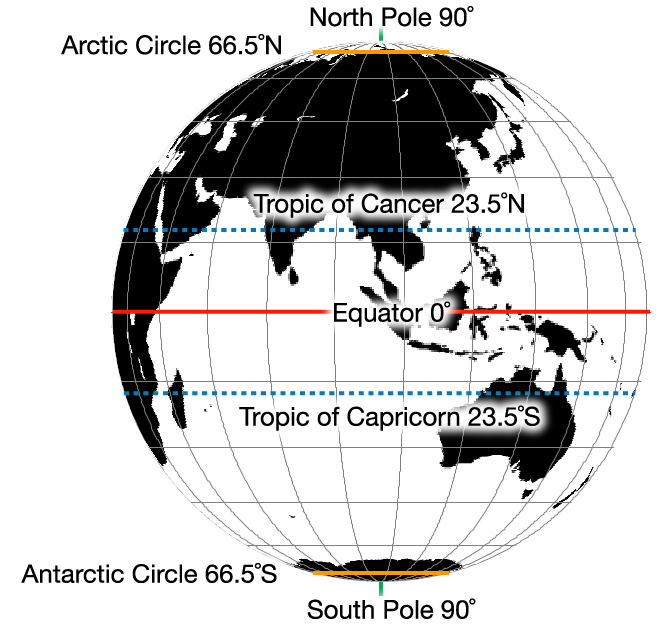 Four significant lines of latitude were also agreed upon. These are:

Because lines of latitude are like slices through the Earth they have different lengths. For example:

For obvious reasons, lines of latitude are called parallels.

Defining longitude was much more difficult, as it is could not be based on observations of movement of the sun. It was, in part, influenced by the discovery of Magnetic North, but ultimately longitude is mostly based on abstract mathematical / geometric concepts.

The convention eventually agreed upon was to have a series of radiating lines which run vertically around the Earth. They connected at both ends – i.e. at the North Pole and the South Pole. As a result of this, a series of ‘slices’ much like slices of an orange are created. These are pointed at their ends and broadest in the middle.

For a considerable period of time the issue of which line of longitude was to be the primary line could not be agreed. For obvious religious reasons, early European maps often used Jerusalem as the primary line of longitude. Because of its status as a centre of learning other early map makers, such as Ptolemy, had used Alexandria in Egypt. More commonly though, for patriotic reasons, many countries chose one of their cities. A few European examples are Copenhagen, Madrid, Paris and Saint Petersburg; while in the United States of America Washington and Philadelphia had been chosen.

Eventually, in October 1884, at the International Meridian Conference, it was agreed that the line of longitude that runs through the Royal Observatory, Greenwich in United Kingdom, was to be adopted as the standard primary line of longitude.

Radiating to the east and to the west would be 180° of longitude. These would meet at the opposite side of the Earth and form a joint 180° line of longitude (with 180°E and 180°W being the same line).

Lines of longitude are called meridians.

Add the Two Together

Combine latitude and longitude together and we have a system to record the location of any feature on the surface of the Earth uniquely.

There are two North Poles:

The first is the Geographic (or True) North Pole:

The second is the Magnetic North Pole

The GisGeography website has a good explanation on how the Earth's magnetic field works and information about the North Magnetic Pole: http://gisgeography.com/magnetic-north-vs-geographic-true-pole/ .

There is also further information available at https://www.dlsweb.rmit.edu.au/toolbox/splash/toolbox_11_04/uoc5/html/p1basic.htm

Finally, there are also two South Poles – Geographic and Magnetic. The Magnetic South Pole is magnetic, but this is very weak and hard to identify even if you are near it, as a result magnetic compasses rarely point to the South Magnetic Pole. Read more about the South Poles on the Australian Antarctic Division's website http://www.antarctica.gov.au/about-antarctica/fact-files/geography/poles-and-directions

Any circular line which runs around the Earth at its fattest point is called a Great Circle. This circle has to be centred over the centre of the Earth. Note the following:

Until the 1890’s time keeping was a local affair. Most people regulated their day by the movement of the Sun – sunrise, noon/midday and sunset. Only the rich could afford clocks and in many places the town hall clocks or the church bells were the only source of official/consistent time.

In the late-1800’s with the development of long distance railways a problem emerged – they needed to run to a schedule and inconsistent times caused significant problems. In 1878, Canadian Sir Sanford Fleming, proposed a system of worldwide time zones based on lines of longitude. Using zones of longitude which were 15° wide he was able to divide the Earth into 24 time zones (one for each hour of the day).

By the mid-1900’s this had become an agreed international system, although some countries, in order to minimise time variations, have opted to choose a particular time for their whole country – regardless of where the longitudinal lines run. 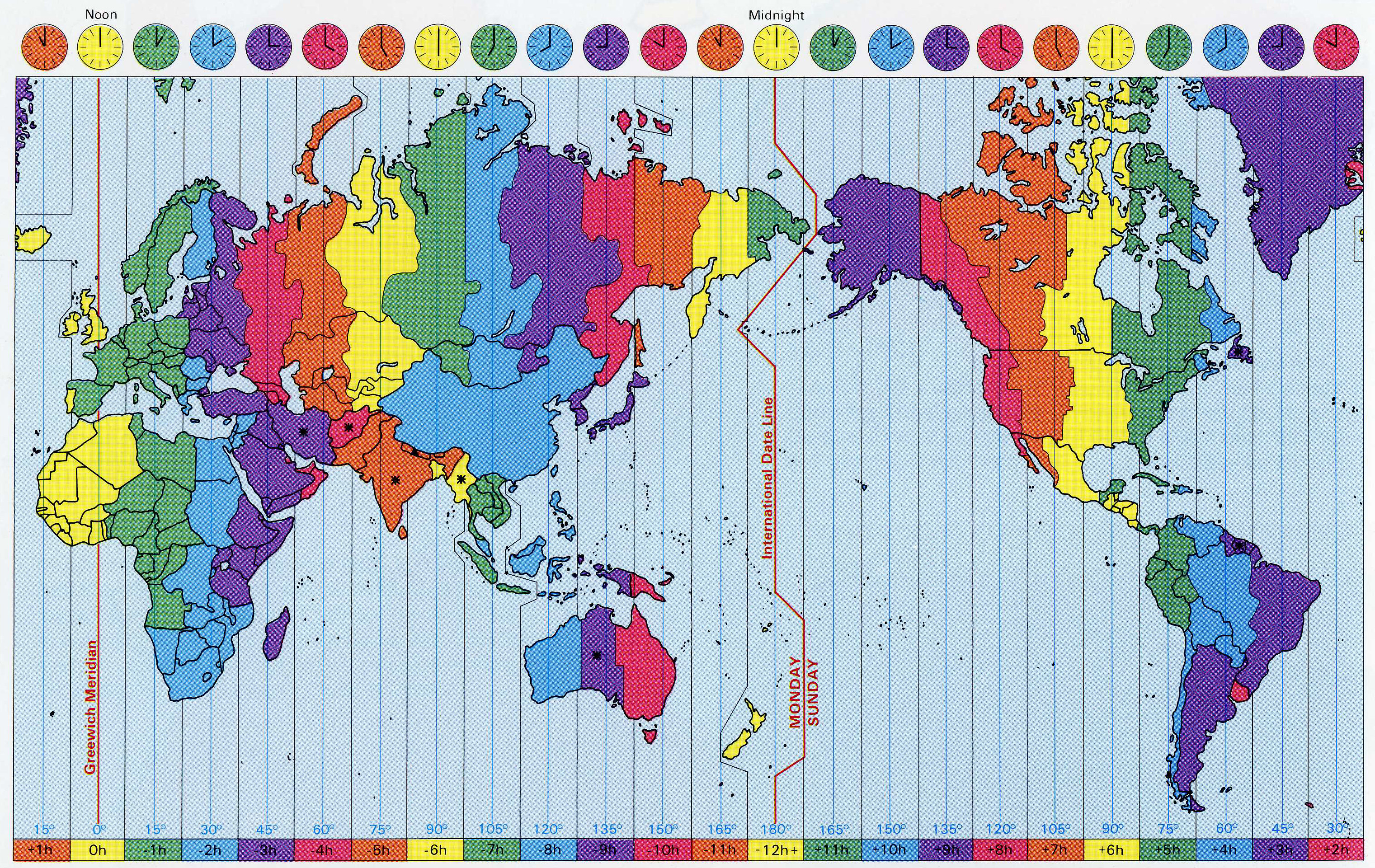 Things to note on this map include: