GPS or Global Positioning System was developed and is maintained by the US Department of Defense. Since the introduction of GPS many other countries have developed similar satellite based navigation systems, such as the Russian Glonass, Chinese BeiDou and European Galelio. Modern surveying GPS equipment, and recent smart phones, are now able to use multiple systems thus increasing the number of satellites ‘visible’ at any one time. Being able to reach these extra satellites improves reliability and accuracy. To distinguish equipment utilising multiple satellite systems the term Global Navigation Satellite System (GNSS) is often used instead of GPS.

As the term GPS is still commonly used and well understood, it is used for the rest of this article.

Initially developed for military use, GPS is now part of everyday life. A few of the many things that GPS is used in include: mobile phones, in-car navigation and search and rescue equipment. But there is a wide variety of equipment and techniques that can be used for surveying.

GPS was rapidly adapted for surveying, as it can give a position (Latitude, Longitude and Height) directly, without the need to measure angles and distances between intermediate points. Survey control could now be established almost anywhere and it was only necessary to have a clear view of the sky so the signal from the GPS satellites could be received clearly.

GPS is similar in some ways to the Trilateration and EDM previously discussed, except that the known positions are now the GPS satellites (and their orbits) 20,000 km in space. The equipment and calculations are extremely complex, but for the user the process is generally very simple.

In the commonly available receivers, the GPS receiver almost instantly works out its position (Latitude, Longitude and Height) with an uncertainty of a few metres, from the data broadcast by the satellites. This data includes a description of the satellites changing position (its orbit) and the time the data was transmitted.

The GPS receivers used for surveying are generally more complex and expensive than those used in everyday life. They use the two frequencies broadcast by the GPS satellites. The physical characteristic of the GPS signal (the phase) and sophisticated calculation methods to greatly improve the accuracy of the positions obtained. These receivers usually have a separate high-quality antenna.

A GPS baseline uses two survey-quality GPS receivers, with one at each end of the line to be measured. They collect data from the same GPS satellites at the same time. The duration of these simultaneous observations varies with the length of the line and the accuracy needed, but is typically an hour or more. When the data from both points is later combined, the difference in position (Latitude, Longitude and Height) between the two points is calculated with special software. Many of the uncertainties of GPS positioning are minimized in these calculations because the distortions in the observations are similar at each end of the baseline and cancel out.

The accuracy obtained from this method depends on the duration of the observations, but is typically about 1 part per million (1 millimetre per kilometre) so a difference in position can be measured over 30 kilometres with an uncertainty of about 30 mm, or about 100 mm over 100 kilometres. Because the GPS satellites are in a very high orbit (20,000 km) the ends of the GPS baseline can be hundreds, or even thousands of kilometres apart and still observe the same satellites.

Although a single baseline from a known position is enough to give the position at the other end of the baseline, additional GPS baselines to other points are often measured to give a check on the results and an estimate of the uncertainty of the calculated position. 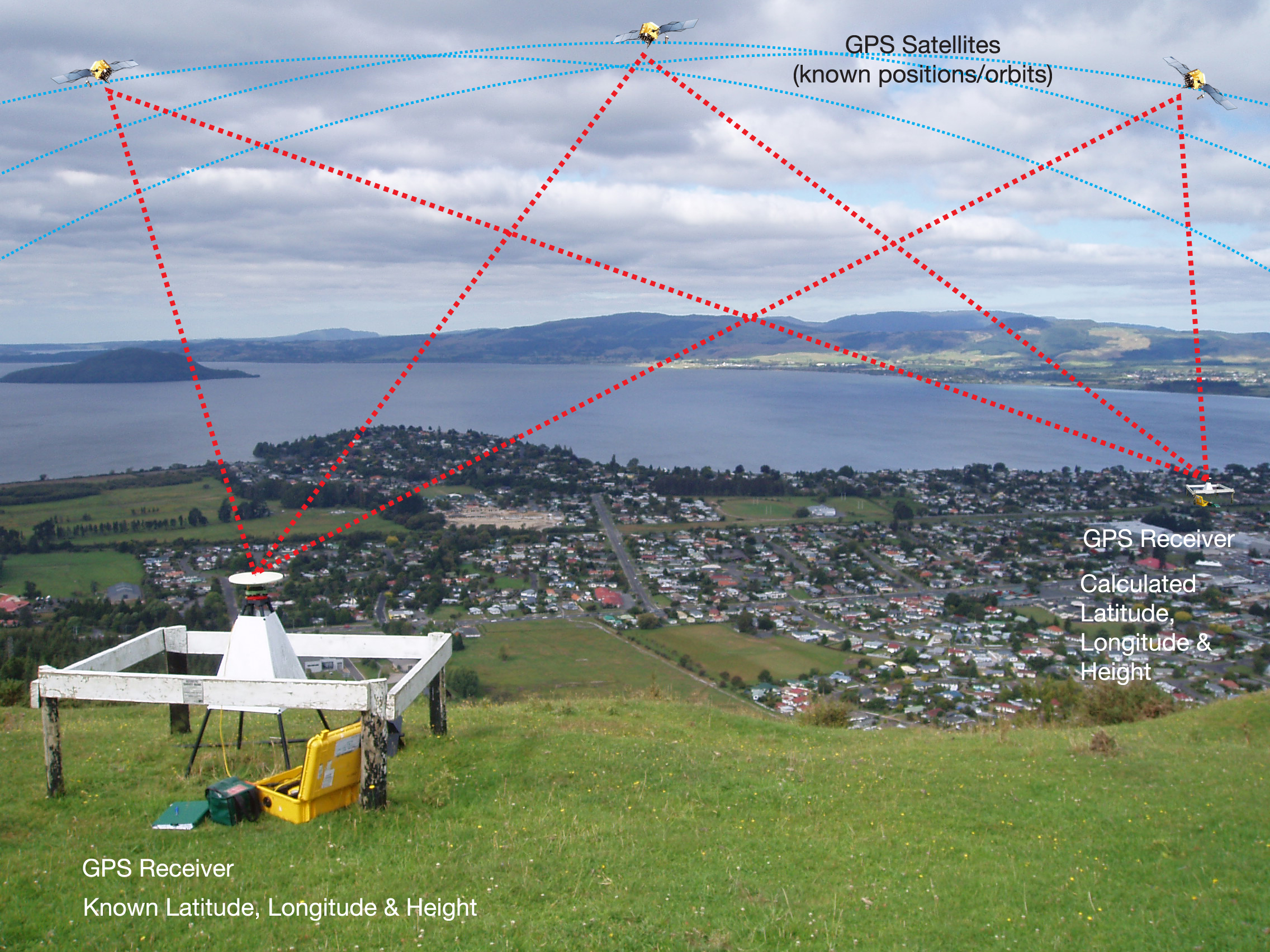 There are many variations on this type of GPS surveying. Generally it is similar to the GPS baseline method, except that while one GPS receiver remains on a known position (Base Station), the other moves between points and it only needs to be at each point for a few seconds. Corrections to the GPS data (based on the known Base Station position and its position computed from the GPS) may be immediately transmitted from the receiver on the Base Station to the receiver at the other end of the line (the remote station). The position of the remote station can then be computed and stored, all within a few seconds. Radios or mobile phones can be used to transmit the corrections. Although this method can give similar accuracy to the baseline method previously described, to do so this method is generally limited to a distance of about 20 kilometres.

A survey-quality GPS receiver may be permanently installed in a convenient location with a known position, to be used as the starting point for any GPS measurements in the district. This could be for a project such as a mine site or major engineering project, or in a town for local government use.

These Continuously Operating Reference Station (CORS) are used by:

If there is more than one CORS available, the unknown position can be calculated with respect to these multiple known positions, giving more confidence in the results.

Many countries have a CORS network which covers the entire nation, allowing accurate GPS positioning anywhere in their country. CORS usually also contribute data to global observations that make the GPS system more reliable and accurate. They also provide data for scientific studies such as plate tectonics and meteorology. To be useful for the study of tectonics, the permanent marks used for the CORS stations must be geologically stable, and the observations should be continuous and for many years.

Australia has state based CORS networks covering the most populated areas. These are generally commercially run providing real-time access to subscribers.

Australia also has a highly accurate freely available national CORS network. The Australian Regional GPS Network (ARGN) may be used with the on-line processing system AUSPOS. This allows GPS data from a survey quality GPS receiver to be submitted via the Internet and a calculated position to be emailed back, typically within a few hours. The calculations used to produce these positions use more accurate satellite orbits and within about 24 hours of observation can give a position anywhere in Australia with an uncertainty of a few centimetres.

Because it is a three-dimensional system, GPS automatically gives height as well as Latitude and Longitude. But the height is above the theoretical surface of the Earth used for the calculations, known as the ellipsoid (so the height is called an ellipsoidal height) not above Mean Sea Level. More information on this subject is available in the Datums- the Basics and Datums Explained in More Detail sections.

Although the Australian Height Datum, Mean Sea Level and the Geoid may be considered the same for most practical purposes, the differences are taken into account for the most accurate applications.

Plate tectonics is the study of the movement of the continental plates that make up the earth's crust. The Australian plate is moving about 7 centimetres a year in a north easterly direction. More information about plate tectonics is available from this site: http://www.ucmp.berkeley.edu/geology/tectonics.html and in the Datums Explained in More Detail section.

Most GPS positions are based on the GPS satellites’ orbits which are transmitted with the data at the time of observation (Broadcast orbits). These orbits are predicted from previous observations at global monitoring stations. For the most accurate positions with GPS, the computations are done much later and use more accurate GPS satellite orbits that are based on observations at global monitoring stations at the time of the original measurement.

Adjustment of Surveying Measurements for Heights

Most of the surveying methods described produce more than the minimum number of observations needed to calculate positions or heights. So it is possible for a position or height to be calculated by several paths through the network of observations and get slightly different results because of the uncertainties in the survey observations. To resolve this, all observations are usually combined into a mathematical process which produces the best position for each point along with an estimate of the uncertainty. This process is known as a Least Squares adjustment.